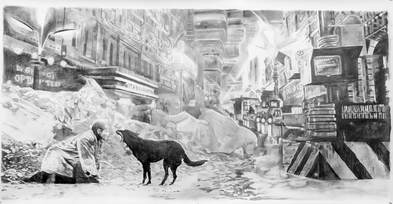 Cities of the Future

It is the business of the future to be dangerous; and it is among the merits of science that it equips the future for its duties.

[1] The reader will recognize that this is a montage from a scene from Béla Tarr’s Damnation (1987) on a scenario extracted from Ridley Scott’s Blade Runner (1982). A method assists the drawing, the cut-up, a powerful technique proposed by William S. Burroughs that supposes interweave inscriptions with many others. Text, sound, image, everything can be enrolled, cut and assembled. Rebuilt in a new object, it is through montage that the present is tensioned while stretching lines for a future. As Burroughs once said somewhere, “when you cut into the Present the Future leaks out.”

[3] This is the thesis of Quentin Meillassoux in Aprés la Finitude. Meillassoux calls correlationism to this anthropocentric program, which he refutes. But instead of aiming at the problem of extinction, as Brassier will later do (Brassier is his translator to English), Meillassoux seeks the domain of ancestrality (arche-fossil) in order to reverse human overconfidence and weight over history, science and metaphysics. Cf. Meillassoux, Q. 2006. Après la Finitude: Essai sur la nécessité de la contingence. Paris: Seuil.

[7] Hence implicating deep consequences: “The panoptic vision of the Earth undergoes an essential convulsion in Modernity, like its transformation into a mere planet, completely mapped, appropriated, scrutinized by satellite, wired by a computer network, etc. It is a technically recreated Earth that is represented as a mere ‘planet’, a star among many others” (Miranda, 2005: 25, my translation).

[8] “This problem of human emplacement is not simply the question of knowing whether there will be enough space for man in the world – a problem that is certainly quite important – but it is also the problem of knowing what relations of vicinity, what type of storage, circulation, spotting, and classification of human elements should be adopted in this or that situation in order to achieve this or that end. We are in an epoch in which space is given to us in the form of relations between emplacements”(Foucault, 1984: 244, my translation).

[9] Covered in the Westphalian peace settlements (1648) that was to shape the Modern State, political and legal foundation based on territorial sovereignty, non-intervention and territoriality (State) with ethnicity and soil (Nation).

[11] This is the reading of Arjun Appadurai in “Sovereignty without Territory: Notes for a Post-National Geography” (2003). But for the future to be beyond the nations, this “imagined universe” that a Nation-State is would have to be rarefied.

[12] Arjun Appadurai identifies five currents that generate cultural landscape - this is a fluid-mapping form of the associations that constitute the global world: (1) ethnoscapes, the human landscape defined by migratory flows; (2) technoscapes, which comprises the overall configuration of the use of technology; (3) financescapes, which corresponds to capital flows; (4) mediascapes, here the role of the media (also television, advertising and cinema) in the distribution of images received collectively; (5) ideoscapes, that is, the global shape of ideologies and the appropriation of “key terms” such as freedom, the welfare state, human rights and democracy by state apparatus and mega companies. Cf. Arjun Appadurai ([1996] 2005), Modernity at Large: Cultural Dimensions of Globalisation. Minneapolis, University of Minnesota Press.

[13] Tracing a juridical genealogy, Carl Schmitt proposes in The Nomos of the Earth that the Jus Publicum Europaeum, a seminal moment of international law, institutionalized war based on a new spatial order that entailed the expansion of Europe to the “free” soil of the American continent. Thus was mitigated war on Europe. Cf. Carl Schmitt. (1950) Der Nomos der Erde im Völkerrecht des Jus Publicum Europaeum. Kölln: Greven.

[14] As Benjamin says: “The ancient intercourse with the cosmos had been different: the ecstatic trance [Rausch]. For it is in this experience alone that we gain certain knowledge of what is nearest to us and what is remotest from us, and never of one without the other. This means, however, that man can be in ecstatic contact with the cosmos only communally. It is the dangerous error of modern men to regard this experience as unimportant and avoidable, and to consign it to the individual as the poetic rapture of starry nights.” (Benjamin, 1929: 107).

[15] To take everything as a machine is the interesting proposal of Levi Bryant – indeed following Bruno Latour who problematized the notion of social actor, since all entities (people, spreadsheets or programs) can be actors. It all depends on the nature of the association. Bryant, related with object-oriented ontology (OOO), proposes a machine-oriented ontology (MOO). Cf. Bryant, Levy. 2015. Onto-Cartography: An Ontology of Machines and Media. Edinburgh University Press.

[16] This will also lead to recompositions in the world of labour - one must expect the end of some professions and the emergence of new ones. On this aspect, this note from Whitehead is important: “[…] the rate of progress is such that an individual human being, of ordinary length of life, will be called upon to face novel situations which find no parallel in his past. The fixed person for the fixed duties, who in older societies was such a godsend, in the future will be a public danger.” (Whitehead, 1925: 196)

[17] This is Hans Blumenberg’s closing idea in The Genesis of the Copernican World: “Returning to the Earth could not have been had except by leaving it […]. It is only as an experience of turning back that we shall accept that for man there are no alternatives to the Earth” (Blumenberg, 1975: 685). Despite the very interesting manoeuvres of SpaceX, it remains uncertain if a human body can live in another astronomical object.